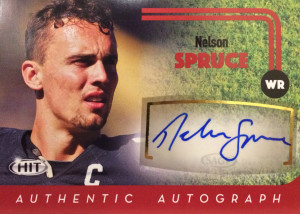 The Colorado Buffallos have a had little to cheer about in football recently with the emergence of guys like Paul Richardson. Spruce benefited from the departure of the speedy receiver, and set school records with 106 catches and 12 touchdowns, along with 1,198 receiving yards. It was enough to earn Spruce Second Team All-Pac-12 honors in 2014.   A good route runner with soft hands, Spruce reminds me mostly of former Texans receiver Kevin Walter.  While his skills are undeniable, his lack of straight line speed is an issue for scouts clocking a 4.59 40, but he could quickly move in as a slot guy or a possession receiver who works special teams as a punt returner.  After a poor showing at the combine, Nelson was marked with a 3rd day rating, but eventually went undrafted. I thought he held potential for a team like the Texans or Patriots, but eventually Spruce signed a free agent contract with the Los Angeles Rams.

Spruce impressed the team well enough that he made the squad, but he was buried on the depth chart.  He’d be injured and spend a good portion of the season on IR, but was activated for the final game of the season versus the Cardinals.