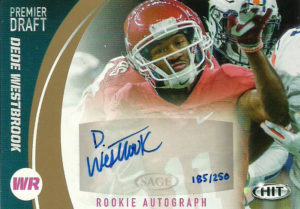 DeDe Westbrook was one of the NCAA’s most explosive playmakers in 2016.  His last year at Oklahoma was nothing short of breathtaking. The receiver put up 80 receptions for 1,524 yards and 17 TDs. He is also a dangerous punt returner taking one to the house as well.  In fact, he finished 4th in Heisman voting last season.
So it’s a wonder up to this point why he was selected in the 4th round of the 2017 draft by the Jacksonville Jaguars.

Let Westbrook’s situation be a lesson to any aspiring football player. I think he’d also say that too.  In 2012 and 2013 he was arrested on charges of domestic violence towards the mother of his child.  Both charges were dropped. Then later ‘anonymous’ scouts burned him over Twitter.  Later again, it was rumored that Westbrook was kicked out of a 15 minute combine interview.  His draft stock obviously took a large hit, and to think of it, if this was 2015 he might not have even been drafted with the way the NFL was taking a hard look at players of questionable character- ‘but it is the way it is’.

Westbrook is well aware that he will be on a short leash in Jacksonville and he’s humbled by their selection.