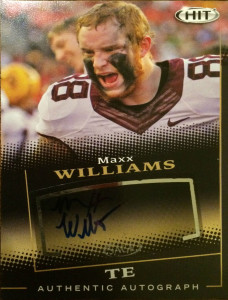 Maxx Williams was the highest rated tight end during the 2015 draft. A lot of buzz surrounded Williams. He had some great highlights playing for the Minnesota Golden Gophers, and definitely has the hands, size, and speed to make defenders pay.  He drew comparisons to  former Giants/Saints tight end Jeremy Shockey, but scouts felt he needed to improve on his route running to become a more complete tight end.  An explosive pass catching TE, Maxx led all TEs with 9 catches of over 25 yards in 2014, while setting single season school records at TE for the Gophers recording 569 receiving yards and 8 TDs.

The Baltimore Ravens moved up a few spots ahead of the TE needy Steelers to snag Maxx Williams in the second round of the 2015 NFL draft.  As the Ravens struggled with injuries, Williams was given plenty of opportunity to start for Baltimore. One of the youngest players in the league, Maxx finished his rookie year with 32 receptions for 268 yards and a TD in 7 starts. He posted donuts in 2016, as he was sidelined for the entire year with a cartilage tear in his knee.

I was really pumped about Williams. I had hoped the Texans would draft him, but alas, they opted to work on a different part of their offense. I later sent him his Sage Artistry card- a pice of really exciting art work, since he had been signing, but apparently the door of opportunity closed on me before I could get him.