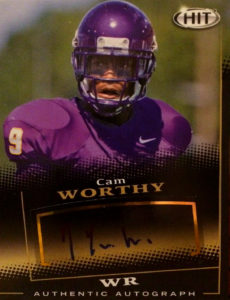 Cam Worthy was quarterback Shane Carden’s favorite target at ECU in 2014.  With natural size and the frame to go with it, Worthy has the body control to contest for many deep passes.  He’d break the 1,000 yard plateau with 55 receptions for 1,016 yards and 4 TDs in his senior year.

Scouts were unenthusiastic about Worthy’s route running.   He then later broke his foot during the Medal of Honor All-Star Game. Worthy went undrafted in 2015 but signed a free agent contract with the Baltimore Ravens.  They placed him on the physically unable to perform list while he recovered from his injury. He was not retained for the 2016 season.