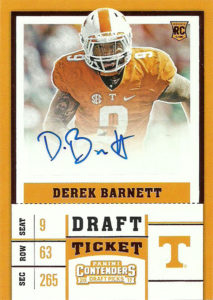 Derek Barnett played collegiality at Tennessee. He’d moderately impress at the combine, with a 6.96 3 cone drill- leading all defensive linemen but his numbers otherwise didn’t eye pop off the charts. Truly though his breadth of work can be found in his stats, as run stuffing monster, he posted 20.5 TFL and 10 sacks in his true Freshman year of 2014.  Then after chipping in another 10 sacks in 2015, he was a first team All-American with 12 sacks and 18 TFL in 2016. Teams salivated at Barnett’s potential, and he was considered an edge rusher both from defensive end or as a outside linebacker.

The Philadelphia Eagles snatched  him up with the 14th pick overall of the 2017 NFL draft.  During the preseason, he received high grades and pushed for starting time. He finished his rookie season with 21 tackles, 3 assists, and 5 sacks in his rookie season, earning rookie honors and winning a Super Bowl with the Eagles.