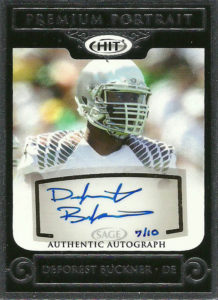 DeForest Bucker was a physical specimen with the stats to back his high draft ranking. Playing for Oregon Ducks he had 232 total tackles, 36 tackles for loss, 18 sacks, 2 fumble recoveries, and 10 passes defended.

I was very pleased to pull this limited signature premium portrait of DeForest Buckner when I opened a Sage 2016 Hobby Box. Buckner has a pretty good autograph, and you can tell he took his time to sign these. I liked the portrait cards and it showcases the custom grill on his helmet that was all the rage at the time with defensive linemen.

Buckner delivered in 2016 and had a solid rookie debut with 73 combined tackles, 6 sacks, and 2 FR. He could be due for an even more impactful 2017, as DeForest will be paired alongside first round pick Solomon Thomas.