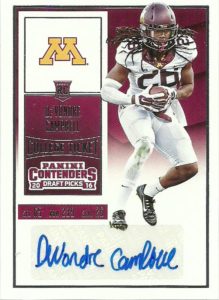 De’Vondre Campbell played collegiality at Minnesota, where he put up some solid numbers. Over his 3 years for the Golden Gophers, De’Vondre had 206 total tackles, 16 tackles for loss, 6.5 sacks, 3 fumble recoveries, and 2 picks for 27 yards- one of which he returned for a touchdown. Campbell showed enough promise that he was selected in the 4th round of the 2016 NFL Draft by the Atlanta Falcons.