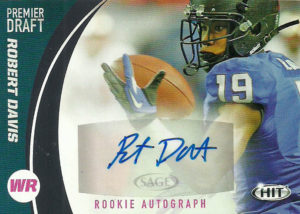 Georgia State wide receiver Robert Davis was a 4 year starter for the Panthers. He put together a good body of work over his time there with 222 reeptions for 3391 yards and 17 touchdowns. At 6’3″, 219, Davis had a pretty good pre-draft workout and snuck into the back end of a few teams’ draft boards. Eventually he was selected by the Washington Redskins with their 6th round pick in the 2017 NFL Draft, who are confident that they can groom him into a pro grade talent. After spending 2017 on the practice squad, Robert was injured during training camp and was placed on injured reserve for 2018.