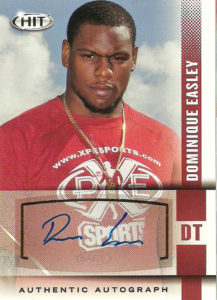 Dominique Easley played college ball for the Florida Gators from 2010 to 2013. An impressive defensive line talent Easley posted 72 total tackles, 18 tackles for loss, and 5.5 sacks, but has been plagued by injuries (most troubling) to his ACL. He’d be selected by the New England Patriots with the 29th pick of the 2014 NFL draft to be groomed as Big Vince Wilfork’s eventual replacement on the line. After playing sparingly, he’d be placed on IR to end his rookie season with 9 tackles, a sack, and a pick. In 2015, Wilfork departed for greener pastures leaving Easley squarely in the rotation, but once again Easley frustratingly finished the season on IR, after just 15 tackles and 2 sacks. He’d be cut by the team in 2016.

Passing through waivers, Dominique signed a contract with the Los Angeles Rams. The bet paid off as he had a solid season worked into the defensive line rotation. He’d post a career high 35 tackles, 3.5 sacks, and 2 forced fumbles. Easley resigned with the Rams in 2017, but tore his ACL again in camp ending his season before it began.