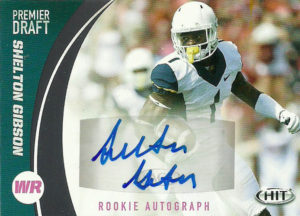 Shelton Gibson played in the Big 12 for the West Virginia Mountaineers from 2014-2016.  An interesting prospect that reminded scouts of a poor man’s DeSean Jackson, Gibson put up 84 receptions for 1,898 yards and 17 TDs in 3 years. He finished with a guady 22.6 average yards per reception. After trading down twice during the 5th round the Philadelphia Eagles selected him with the 166th pick overall in the 2017 NFL Draft.

It was a hard charge uphill for Gibson to make the roster, but each and every day he made incremental improvements that coaches took notice of. Shelton battled a case of the dropsies during the preseason, but coaches feel that there is something developmentally there the Eagles can work with. He got on the field briefly during Philadelphia’s 2017 Super Bowl Championship run and caught 2 his first two passes for 11 yards against the Cowboys.