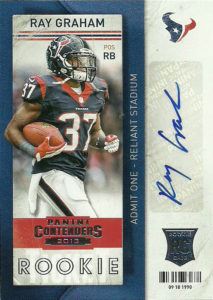 Ray Graham played football at Pitt from 2009 to 2012. He put together increasing numbers in each year, culminating in his Senior year when he ran 222 times for 1042 yards and 11 TDs.  Over 4 years he had 595 carries for 3271 yards and 32 TDs. Ray also displayed a really nice touch out of the backfield, catching 98 passes, including 36 in his Senior year.  Considered more of a slasher at the pro level, scouts tore apart his game and did not feel that Ray had the size to play at the pro level. He went unselected in the 2013 NFL Draft but signed a free agent contract with the Houston Texans.

The Texans were looking for runningback help. As nagging injuries were catching up with Arian Foster and Ben Tate, the Texans were looking for new blood to help out in the backfield.  They signed a trio of free agents- all promising backs: Ray, Cierre Wood, and Dennis Johnson. Ray had a decent preseason scoring a really nice TD against the Vikings, and as a natural zone runner, I really liked his style, but unfortunately in a game of numbers, he’d be cut- as the team opted to keep Wood.  Graham was picked up by the Steelers and added to their practice squad.

As things would have it, Arian Foster went down due to injury. Wood blew his chance with the team violating an ‘unspecified team rule’ and was released. Graham found himself back on the squad and rushed 4 times for 8 yards. He’d also make one catch for 12 yards.

Ray had enough talent to probably take his game to another team in 2014 after he was cut, but currently is considered a free agent or retired from the sport.