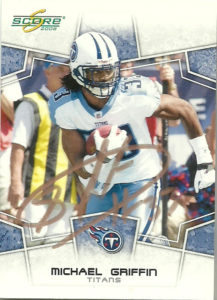 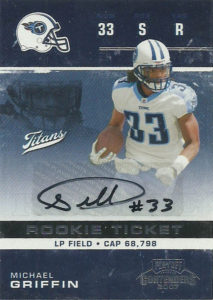 After Michael’s 9th season in the NFL, in which he recorded 101 tackles, an interception, and a sack, he was released in the off season by the Tennessee Titans.  With gas still left in the tank, Michael signed with the Minnesota Vikings for 2016. He’d be injured during the preseason and released. Rehabbing from his injury Griffin signed with the Carolina Panthers. He played in 10 games contributing 30 tackles.  In 2017, Michael joined Longhorn Legends TJ Ford and Cory Redding in finishing his bachelor’s degree with Griffin’s being in youth and community services. 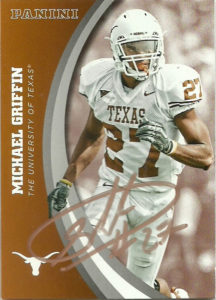 I’ve always liked the Playoff Contenders series, strictly because it follows a slow evolution rule, much like the Corvette. Every year, small tweaks in the design and look of the card. The 2007 entry was a nice set, but I really disliked the tiny Titans pinstripe type. It says baseball, not football with that typeface. It’s also just dangling out there distracting from the image of the player. It does not pass the thumb test. Basically if you put your thumb to the image over the Titans pinstripe the image looks better without the pinstripe. Still it was a pretty solid card and the certified autograph works well on this canvas.

Fellow Longhorn and Titan alum, Brian Orapko and Griff had been teasing the grand opening of their cupcake restaurant GiGi’s in Bee Cave.  After I heard they had a soft opening for their social media fans the previous day, I made the trip from East of Austin all the way to Bee Cave through the freezing rain. It paid off as both Brian and Orapko were there as well as Jamaal Charles (special random guest appearance)! Michael was kind enough to pen the Panini 2015 UT card as well as his Score 2008 card. The cupcakes were also really good too!