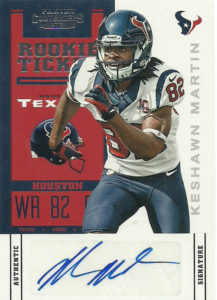 Keshawn Martin was quite the enigma. He had respectable numbers at Michigan State as one of Kirk Cousins‘ favorite targets.  K-Mart dabbled in all phases of the game for the Spartans, returning, receiving, rushing, – heck he even threw a pass or 2. He was most dangerous as a speedy return man, evidenced by the 2 punt returns and the kick return he had for a TD. In his Senior season (2011) he had a career high 777 yards on 66 receptions. The Houston Texans needing return and wide receiver help, selected Keshawn in the 4th round of the 2012 NFL draft.

He’d overtake Trindon Holliday in camp and assume return duties. The Texans hoped that Martin would also grow into being a reliable slot receiver along the way. Although Martin’s career was punctuated by some great moments he had a couldn’t crack the starting lineup, because he had a hard time catching passes. It also didn’t help that the Texans went through a quarterback carousel. Martin played for Houston through the 2014 season. In 2015, Houston traded Keshawn to the New England Patriots. He finished his Texans career with 38 receptions, 416 yards, and 3 TDs. As a returner Keshawn had 80 returns for 2001 yards, and 94 punt returns for 858 yards and a TD.

During his lone season with the Patriots, Keshawn saw time in 9 contests catching 24 passes for 269 yards and 2 TDs. Although he was signed to an extension after the season, he’d be released during the final cuts in 2016. He joined the 49ers briefly, later landing on the roster of the Lions in 2017 but as of early 2018 appears to be a free agent.

Really nice card of Keyshawn here. I like the depth of the image, especially the definition to his face.  The design also is very complimentary. I’d give this set high marks. Keyshawn’s autograph is unfortunately pretty terrible and doesn’t compliment the excitement that the card embodies at all.