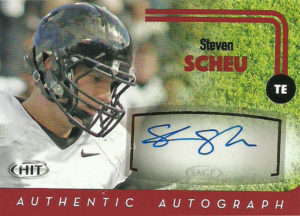 Steven Scheu played college ball for Vanderbilt at tight end. Clocking in at 6’5″, 245, Scheu certainly has the size but needs to fill out his frame to be a more effective blocker. His best season came in 2014 when he posted 39 catches for 525 yards and 4 touchdowns earning him All-SEC Honors. Steven finished his career for the Commodores with 83 receptions for 933 yards and 7 touchdowns.  He’d go undrafted in 2016, but sign with the Patriots as a free agent. After being cut Scheu was later signed to the Broncos practice squad. During the 2017 preseason, Steven caught a 21 yard TD from backup Kyle Sloter, but it wouldn’t be enough to help him make the roster. Currently Steven is a free agent.