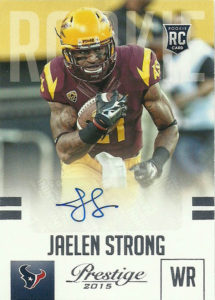 My friends and I liked to call Jaelen ‘Colt Killer’ because the only time that he seemed to show up was against the Indianapolis Colts- as he caught all 3 of his NFL TDs against them in 2 games. In fact his first TD grab was an improbable 42 yard Hail Mary. Oddly enough, he just failed to show up for almost any other game, and seemed to be regularly in Coach Bill O’Brien’s doghouse.

Jaelen certainly had potential. He had 2 stellar years under his belt from his time at Arizona State. While playing for the Sun Devils he posted back to back 1100+ yard, 75+ catch seasons. He was considered a raw talent, with an ideal frame, but with average speed. Some teams loved Jaelen. Others absolutely hated him. Projections were all over the board with the general consensus that he was a round 1-2 pick. In the end, the Houston Texans selected him during round 3.  Strong felt so slighted to be selected so late, he chose the number 11- because he was the 11th pick of the 3rd round, and he wanted to have a chip on his shoulder to motivate him.

Strong struggled with the rigors of NFL conditioning- showing up overweight to camp, and then an off the field issue didn’t help because the Texans are a zero tolerance franchise. He’d be released after the second game of the 2017 season. Jaelen latched on with division rival Jacksonville- but tweaked his hamstring and did not make a catch. He was cut in mid-November and after clearing waivers, joined their practice squad. Jaelen made his first start in Week 15 against San Fransisco. He’d record 3 catches for 36 yards and a TD, before tearing his ACL. Currently he’s a free agent.