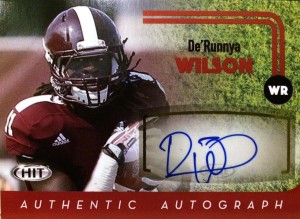 At 6’5″, 215, De’Runnya Wilson is a big and tall receiver with soft hands and deceptive speed. He finished 5th in school history with 133 receptions, and led the team in catches, yards, and touchdowns in 2014.  A basketball star who moonlighted as a football player, Wilson is going to need to improve his consistency when he hits the pro level, but shows some flashes of NFL potential.  A popular player around campus- Wilson declared for the 2016 NFL draft as a Junior. Going unselected he was picked up in October of that year, by the Chicago Bears and added to their practice squad.