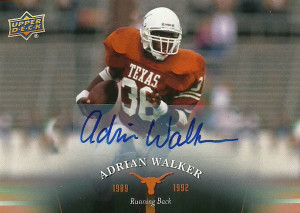 Adrian Walker played for the University of Texas from 1989 through 1992.  During his time with the Longhorns, Walker played in 42 games and was second in SWC rushing attempts during his Redshirt Freshman year with 193 carries. In 1989 he finished with over 1,000 total yards from scrimmage. Walker’s finest season came during 1992, when he ran for a career high 852 yards on a whopping 6.6 yards per carry.  He finished his Longhorn career with 501 carries for 2,473 yards, 17 TDs rushing,  and 36 receptions for 250 yards and a TD.  Adrian also saw time on the kick return unit with 41 returns for 838 yards.  At the time of his graduation Walker was ranked top 10 in Longhorn history in both rushing yards and touchdowns.