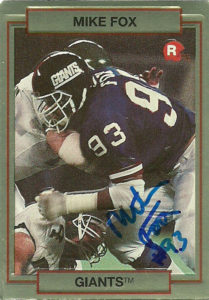 At defensive tackle, Mike Fox could come alive and take over a game during his college days. A dominant defender, Fox was considered one of the best defensive linemen  to ever play for West Virginia. He had his best year in his Senior campaign, when he had 71 total tackles, 22 tackles for loss, and 10 sacks earning him Honorable Mention All-American.

He’d be selected in the second round by the New York Giants, who decided that his massive frame (6’6″, 272) was a good fit for their 3-4 alignment. They thought he had the versatility to play both defensive end and nose.  The Giants were pretty stacked with Erik Howard and Leonard Marshall, but were always looking for up and coming talent. Mike played sparingly his rookie year, but won Super Bowl XXV as a member of the team.

Mike’s best year with the Giants came as a full time starter in 1993. Playing at right defensive end he had 32 tackles, 4.5 sacks, and 1 fumble recovery. He’d play with New York through 1994, and then was selected by the Carolina Panthers during their expansion draft. He had his best season as a pro for the expansion Panthers in 1995, posting 42 tackles, and 4.5 sacks in 16 starts. Over the next 3 additional seasons, injuries would catch up with Mike and hamper his productivity. The Panthers left him exposed for the Cleveland Browns Expansion Draft in 1999 but he’d go unselected. Soon thereafter he’d be cut and retired.

Mike seldom signs through the mail, so to get him on a cheap paid signing didn’t really ruffle my feathers too much. His autograph is pretty pedestrian, but the card is really nice. Thankfully he signed it on the front and not in that tiny autograph box on the back. 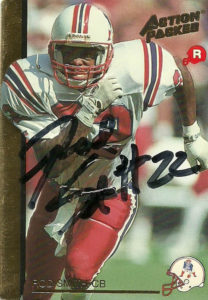 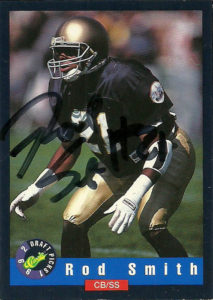 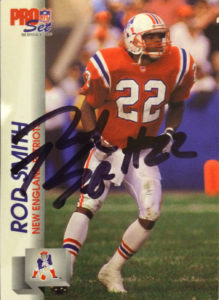