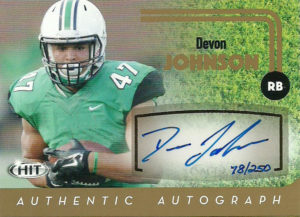 Rockhead Devon Johnson went to Marshall where he was plugged in all over the place to get him on the field and acclimated to a position. During his time for the Thundering Herd, he was a LB, TE, and FB before being switched to tailback. He finished his career with 305 carries for 2,373 yards, and 25 TDs,  Devon’s yards per carry was a fantastic 7.8 per carry. He would’ve fared better if not for a nasty back injury that cost him 6 games as a senior. Classified as a fullback by NFL scouts, Rockhead was not selected in the 2016 NFL Draft.  He was signed by the Carolina Panthers but after an injury in the preseason, he was waved with an injured reserve designation that sidelined him all year. Johnson got another look with the squad when he returned from injury in 2017, but Rockhead did not make the final cuts.