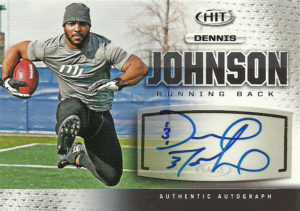 Dennis Johnson was an undersized speedster out of Arkansas who was overshadowed much of his career by Knile Davis.  During his 5 years for the Razorbacks Johnson amassed a nice resume, rushing 345 times for 2036 yards and 13 TDs.  He also showed promise as a receiver coming out of the backfield contributing 63 receptions for 510 yards and 4 TDs, and contributed on special teams with 119 returns for 2784 yards and 3 TDs.   Many NFL teams pegged him as a 3rd down/ change of pace scat back.  Despite an impressive stat line, Johnson was not selected in 2013.  He’d sign as a free agent with the Houston Texans. 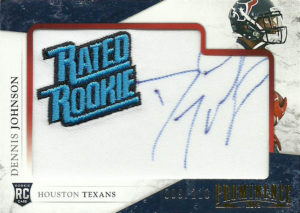 The Texans were doing some reshuffling at runningback, and were looking for a change of pace back to compliment the running attack led by oft injured Arian Foster and Ben Tate. They signed Johnson, Cierre Wood, and Ray Graham. While Johnson did have a nice preseason, including some sizzling plays, he also put the rock on the ground a few times. He’d be on the outside looking in during final cuts, but be picked up by the Browns.

The Texans in the meantime went through a disaster at runningback, as the team’s Super Bowl aspirations faded quickly out of the gate. With Foster and Tate both nursing injuries and Wood cut due to the Texans’ zero tolerance policy, Johnson was resigned by the Texans off the Browns practice squad. He’d start one game and rush for 183 yards in 8 contests.

With a new regime in town, Johnson was cut in August of 2014. He played for the the Brooklyn Bolts of the FXFL later that year, but as of 2017, he remains an NFL free agent.

DJ had some pretty nice looking cards available to me to choose from. I really liked his Sage entry. It was pretty awesome of him to pose for the photo jumping up in the air. It adds an entirely new level to what could’ve been an otherwise boring shot. The jersey material printed on the card is reminiscent of something I’d do to a custom, and it is executed well. DJ’s autograph on the Sage canvas is unique and interesting to look at.

The idea of a jersey card is neat and all, especially when it is a jumbo swatch, but it becomes quite tricky to build a satisfying composition for the rest of the assets when it takes up so much space. Case in point this Donruss Rated rookie card. The patch takes up so much space we’re left with a discombobulated and disconnected DJ barely poking out from the right side of the card.  The autograph isn’t even completely framed up on the card, and either goes underneath the card material or is incomplete.