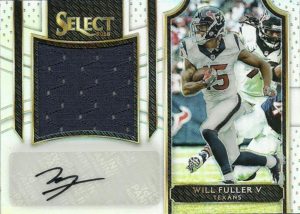 With Will being injured early in the 2017 preseason, I started looking at the market on his autographs, thinking that there might be some desperate sellers out there looking to move inventory. I threw out a low ball bid at the seller and he accepted. I was expecting him to reject the bid, so I was ecstatic to pry it off of him at such a reasonable price. It was an amazing find as it was a patch card autograph and the first in the series of a limited run. This select card is quite the beauty. It’s framed up well, and has a nice shine to it. Everything on this card is just the right size, and the design texture elements really compliment the card well, even down to the stitching on the jersey. Will’s autograph is a bit undersized on the sticker, but that’s okay- I’ll take it!

One of the top rated receivers in an overall average 2016 receiver class, Will was a speed merchant for the Fightin’ Irish of Notre Dame.  He had solid numbers in both 2014 (76 receptions, 1094 yards, 15 TDs) and 2015 (62 receptions, 1258 yards, 14 TDs) before declaring for the NFL draft. The Houston Texans had been leaning WR before the draft and wanted to have a deep threat compliment to DeAndre Hopkins. The top 4 receivers were Corey Coleman, Laquon Treadwell, Josh Doctson, and Will Fuller. After the Browns took Coleman early at #15 overall, the Texans traded up 1 spot with the Redskins to #21 overall and selected Fuller, leaving both Treadwell and Doctson on the board.  Fuller’s speed was undeniable (4.29 combine) and the Texans admitted that they needed to get much faster on offense.

I took a flyer on Will on my last pick of the draft, and he didn’t disappoint early on. Fuller’s first two games started off with a bang, as he had 9 catches for 211 yards and a TD. Already there was rookie of the year talk throughout the media following Flash around. The problem was, while the offense had gotten much faster, the quarterback play from Brock Osweiler got worse. You see, Osweiler couldn’t hit the broadside of a barn on the deep throw, and with Fuller’s penchant for the dropsies, the two didn’t mesh as well as expected. Will also got to spend some time working punt return duty. During a week 4 contest win over the Titans, Fuller had 7 catches for 81 yards and a TD, while returning a punt 67 yards to paydirt. He finished his rookie season with 47 receptions for 635 yards and 2 TDs, and 11 punt returns for 165 yards and a TD.

Exciting things were expected of Fuller entering 2017, but a shoulder injury during the preseason sidelined him for at least a quarter of the season. He returned in time to start 10 games, quickly building a rapport with rookie quarterback sensation Deshaun Watson. Fuller posted the majority of his numbers in his first 4 games back while Watson was healthy. In each game he had at least a touchdown grab. Will’s best game came in a 41-38 loss to Seattle where he torched the Seahawks for 125 yards and 2 TDs on 5 catches. Fuller ended up with 28 receptions for 423 yards and 7 TDs on the season. As Watson returns from injury, Fuller looks to take advantage of a full off season with the anointed starting quarterback of the Texans.