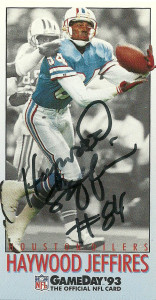 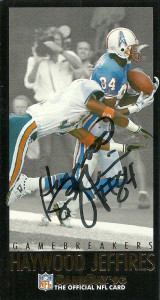 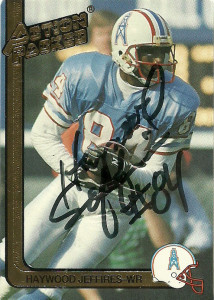 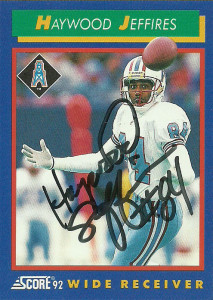 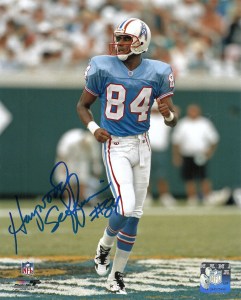 Well another former Oiler that I was trying to get is off the list. Haywood Jeffires is known in autograph circles, at least TTM as a very difficult autograph to acquire.  On many websites that post autograph percentages through the mail, he rates at a fat 0%.  Unfortunately I sent off 5 cards to him in 2010- and never saw them again.  So when I got word that Ernest Givins and Haywood Jeffires were going to be at the same table for Fan Fest this year, I immediately penciled them near the top of my list to get.  I had many more that I intended to get autographed, but with a limit of one per person, I was fortunate to get two from him. To get the additional card signed, I cited his zero percent signing rate, to which he coyly admitted that he does not sign anything through the mail. Haywood looks almost the same as he did when he retired, and he still wears those turtlenecks, even if it is 90 degrees outside. I told him he was always my favorite player when he joined the team when I was a kid because we shared the same birthday. He tested me and asked the date which surprised him. In order not to scare him any further, I quickly thanked him for his time, shook his hand and was on my way,  pleased with my acquisition on these two very fine cards.