Rodney Smith was an intriguing prospect coming into the 2013 draft. On paper he has many of the athletic tangibles that many teams desire of their prospects at wide receiver, clocking in at 6’5″, with long arms (84″ wingspan) , and a decent 40 at 4.51.
Still the knock on Smith was his lack of production at the college level, and his inability to outmuscle competition at the line of scrimmage (225 lb), especially in press coverage. This comes as quite a mixed bag as he has also been hailed for his aggressive blocking, and his production numbers didn’t really gel until his junior and senior seasons. It is thought that he needs at least another season to develop and put on the bulk that he needs to compete at the pro level and may see a conversion to tight end in the future.

Smith seemed to have fallen into good hands, being reunited with his college quarterback Christian Ponder on the Vikings, after going undrafted in the 2013.  He’d hang onto the practice roster through October of 2014, and after being released,  quickly be signed by the Browns, only to be cut in August of 2015.

Rodney is currently a member of the  Dallas Cowboys practice squad. 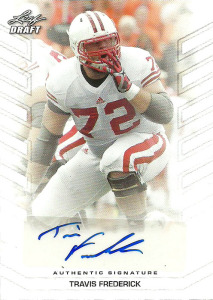 One of the better offensive linemen of the 2013 draft, Travis Frederick was a skilled mauler both at center and at guard for Wisconsin. Opting to declare early for the NFL draft, Travis was rated as the #1 center in the 2013 Draft.  With a run on offensive linemen early in the draft, Frederick’s card moved up into the first round where the Dallas Cowboys carefully decided to select him with the second to the last pick of round 1. Roundly criticized initially for the pick, with more glaring needs on the board, the Cowboys actually made the safest and strongest pick they could by reinforcing the offensive line that was protecting quarterback Tony Romo.

Frederick has anchored the center position since his rookie year, unseating veteran Phil Costa. (It was a milestone as he was the first Cowboys rookie center to do so.) In 2014 Frederick was named to the ProBowl after leading an exceptional line that paved the way for runningback DeMarco Murray to challenge the single season NFL rushing record. Although the Cowboys fortunes sunk early on after a promising start in 2015, Fredrick garnered his  second consecutive 2nd Team All-Pro nomination. 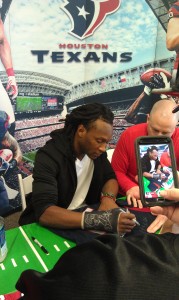 A really well run event all the way around,  I had been looking for an opportunity to get DeAndre Hopkins autograph on a few cards. It can be quite a saga to get to Houston, but this one went off without a hitch.  I met up with Lance and we caught up while waiting in line.  Although the weather deteriorated after got I there, it worked to our benefit, as less people showed up, allowing us to go through the line a second time.  Hopkins had a cast on his hand. Unfortunately I asked why he had it and this translated into a usable news bite for the local media. Thankfully he was just having a minor procedure. 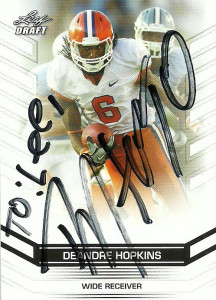 DeAndre Hopkins was tagged very early on in the draft process by pundits going to the Texans in the 2013 draft.  They’d be dead on, as DeAndre was selected by Houston with the 27th pick of the first round.  Although I had my eye on a few other players at that position, I was satisfied overall with the pick.

A prolific receiver for the Clemson Tigers of the ACC, DeAndre Hopkins set school records for career receiving yards (3,020) and touchdowns (27).  He joined the Texans and contributed immediately to the starting lineup. He’d be one of the few bright spots on the team as Houston’s fortunes sunk to a 2-14 record. Hopkins showed flashes early in the preseason and it quickly translated to the regular season when he caught his first TD in an OT victory over the Titans.  Hopkins earned All-Rookie honors finishing 2013 with 52 receptions for 802 yards and 2 touchdowns. 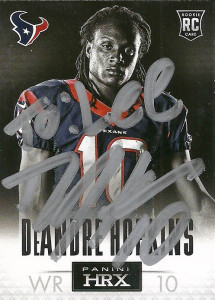 As the team transitioned at quarterback from Matt Schaub to Ryan Fitzpatrick in 2014, Nuk’s numbers only improved, as he posted career highs with 76 receptions for 1,210 yards 6 touchdowns, including a 76 yard long.

Hopkins always seems to save the best for Tennessee. During their 2014 home stand, Hopkins caught 9 passes for 238 yards and 2 touchdowns in a 45-21 thrashing of the Titans. I drafted him very late in my fantasy draft last year, and reaped the rewards. An ascending star on the Houston offense, Hopkins is the heir apparent to Andre Johnson in the Texans receiver corps.