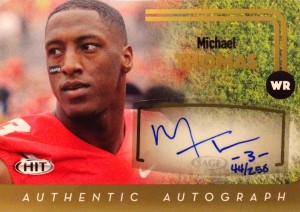 Michael Thomas is ranked among the top 5 prospects at wide receiver in the 2016 NFL draft. Aided by perhaps his pedigree as a member of Ohio State, Thomas has shot up boards with incredible boom/ bust potential. He’s got the big 3 things scouts look for in spades (weight, speed, and height) but scouts were unimpressed by his football load while playing for the Buckeyes. They just felt he was underutilized, wasn’t demanded to use too much of the route tree, and didn’t showcase his abilities- which he’s just scratching the surface of.  Still it looks like Thomas will go as early as round 2 or late as round 3 in the 2016 NFL draft. He shot up final draft boards, and the Saints drafted him with their second round pick. Thomas is expected to replace recently departed Marques Colston at WR.