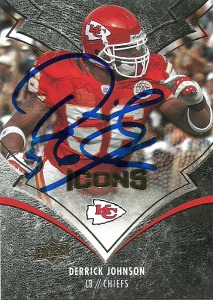 Got a tip from a fellow collector (Nathanlg) about Derrick tweeting about a grand opening he was appearing at in Austin. Nathan and I go way, way back, however we hadn’t spoken in some 20 years, but we had been kicking the can for sometime about covering an autograph event together, since we are both avid collectors. We hit the Total Athlete grand opening a few minutes after it started. I was really surprised that the location was the former maintenance hangar of the Pflugerville Municipal Airport.  For many, many years, I’d drive by the airport on Howard Lane when I was younger. I don’t think it’d ever strike me that I’d ever go there one day for an autograph signing. Makes me think again about how small the world is physically, spatially, and socially.

Derrick was not only in attendance, – the whole building was 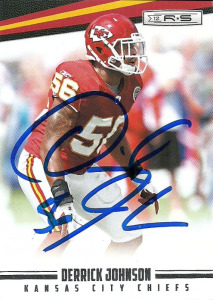 decked out inside with amazing full size banners of him. The facility itself specialized in resistance training. It had a few weights, but the majority of it was built towards strength and conditioning, with half of the surface covered in synthetic turf. There were a few local vendors there, and a few former UT personalities showed up including Lee Jackson, Brian Orapko, and Tim Crowder.   I even ran into a former San Antonio Talon who is a trainer there. Again- small world.

It took me a while to get around to Derrick with Nathan. I think we both didn’t want to just walk in and crash his grand opening for autographs right off the bat. While Nathan had this really nice custom replica UT helmet he made signed, I was able to slip in afterwards for a few signatures on these cards. I brought up the 2005 draft with him and how he was almost a member of the Houston Texans, not once, but twice. He almost sounded like he had a chip on his shoulder about it, and recited to me with a chuckle, how the Texans took Travis Johnson instead. I lamented to him about what could’ve been the combination of Derrick Johnson and De’Meco Ryans the Texans might have had. He grabbed all 4 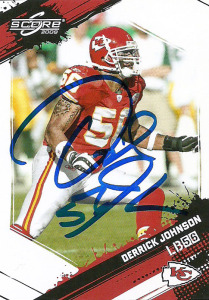 cards out of my hand and signed each one without blinking an eye. It was very nice of him.

Score 2009 is one of my favorite sets of the past ten years or so. I really like the distinctive design and splatter art effect. It’s just very stylish. I do go out of my way to get cards autographed from this set when the opportunity presents itself, so I was really pleased to get this one. The rest are a mishmosh of different cards from different sets that I had acquired or wanted to study. I do like this Upper Deck Icons card. Again, a really well thought out design. I like how the figure breaks the plane of the design, and the red streaks slice up the metallic border.

On the other hand, the 2012 sets are a really bad let down. I thought that the Donruss Rookies & Stars 2012 set would be as good as their 2011 and 2010 offerings but sadly it evolved into this flat and boring design. I should’ve just trusted my instincts since there was no preview of the card on the outside of the box. Likewise, Score went the same direction with their 2012 offering which I yawned at. 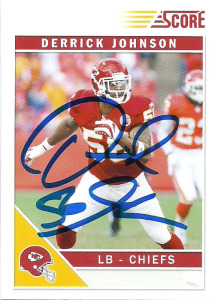 After the 2013 season, Johnson engineered another ProBowl appearance. He earned Defensive Player of the Game Honors for Team Rice notching 9 tackles and a pass block. Derrick afterwards was off to a fast start during Week 1 in 2014, if not for a torn Achilles he suffered against the Tennessee Titans, eraisng his entire campaign. In 10 seasons playing inside at linebacker with the Chiefs, Johnson’s 981 tackles rank third in team history. 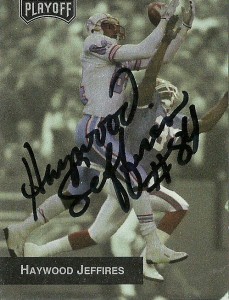 about the team and players on that offense
because they played in the Run ‘N Shoot. The Oilers after the 1993 season imploded, and while Jeffires somehow made the Probowl that season, his numbers were clearly in the decline. Over the years he had a friendly rivalry with Ernest Givins, and by 1995, only trailed him in receptions on the career list for the Oilers. For the 3rd consecutive season, he was placed on waivers as the team worked to put him under the salary cap, but with new signee Willie Davis receiving a big contract to play with the team- Jeffires decided to entertain suitors. Kansas City, Jacksonville, and New Orleans all made a play for the former Oiler, but in the end he’d finish his career in New Orleans. Jeffires suffered a season ending knee injury that year, and then was placed on waivers by the team. He ended up on the Bears but did not make the roster of the 1996 team. He has fond memories of playing for the Oilers, and doesn’t hold any hard feelings towards the fans, and it’s certainly odd for me when I see cards of Jeffires in a New Orleans outfit. I remember at the time it made me particularly sore, since he was one of my favorite players, so I can certainly relate to those fans who chagrin at Favre in a Jets jersey, Simpson in a 49er uniform, or Namath putting on a Rams helmet. Jordan Shipley was an outstanding receiver for the University of Texas football program. At the time of his graduation he was the school’s all-time leader in receptions with 248, second in yards with 3,191, and second in touchdowns with 33. A two time All-American catching passes from Colt McCoy, Shipley also demonstrated versatility on special teams holding on FGs and returning punts and kickoffs.  (Jordan played 6 years at UT, losing 2 to medical redshirt.)

Shipley was taken in the 3rd round of the 2010 draft by the Cincinnati Bengals. The Bengals were set with starters Chad OchoCinco (Johnson) and Terrell Owens, so he spent a significant amount of his time on the bench behind them. Thankfully with Carson Palmer under center at the time, there was plenty to go around. Jordan finished 2010 ranked 3rd among rookies with 52 receptions for 600 yards (11.5 YPC) and 3 touchdowns. Things were looking up going into 2011, but in week 2 he suffered a terrible knee injury that required him to miss the entire season and a good portion of the 2012 preseason. Inexplicably he’d be cut by the Bengals, and was picked up by the Tampa Bay Buccaneers briefly. Soon there after Shipley was signed by the Jacksonville Jaguars and finished 2012 with 23 receptions for 244 yards, 10.6 YPC, and a touchdown. In early 2013, the Jaguars rewarded him by resigning him as an exclusive rights free agent.

I heard about the Jordan Shipley signing at Sam’s Club through the Texas Autograph Club boards. Surprisingly there was very little traffic for Jordan at the store, so he had no problem signing the Score card plus the Tyson’s card. I was a bit disappointed that I only had one of him, but hear that he’s always found signing things around Austin, so I will try to get back to him again. We talked briefly about his grizzled beard, if he’d sign with the Texans who needed a good slot presence, had a good laugh, and took a photo before I was out the door. Overall it was a pretty good experience and I hope he gets to prove himself with the Jaguars- just not when playing against the Texans.