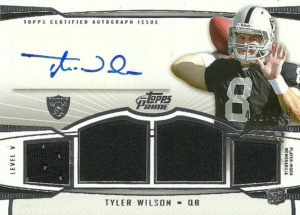 Tyler Wilson is a well-decorated quarterback who played collegiality for the Arkansas Razorbacks. Appearing in 37 games Wilson had 593 completions on 948 attempts, 7,765 yards, and 52 TDs to 26 interceptions. He set numerous passing records at the school during his tenure there, but scouts picked his game apart largely due in part to a lackluster Senior season. Still Tyler was selected in the 4th round of the 2013 NFL Draft.

He’d go into camp competing against Terrell Pryor, Matt McGloin, and Matt Flynn- but be cut at the end of the preseason. The Raiders signed him to their practice squad, elevating him to the regular season roster later in the year. After being released, Tyler signed with the Tennessee Titans but was cut in August. A few days later he signed with the Cincinnati Bengals but was cut at the end of the month.

Wilson’s story is a cautionary one in the sense that if he had declared after his Junior season, he stood a good chance at being selected in the first round of the 2012 draft.  As of 2018, he lives in Little Rock and is a real estate agent.