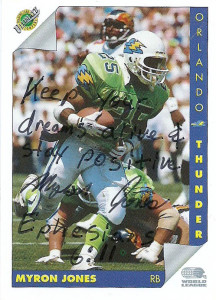 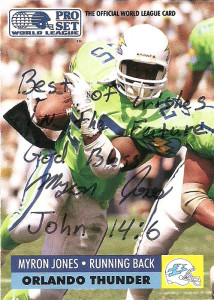 Myron ran for 863 yards and scored 15 touchdowns as a Senior at Fresno State in 1989.  An 11th round pick of the then Los Angeles Raiders, he’d be cut in camp before the regular season, and join the Hamilton Tiger-Cats of the CFL. Released by the Ti-cats, Jones attracted attention of the WLAF and was selected in the first round (4th overall) of the positional draft by the Orlando Thunder.

A Run ‘N Shoot team coached by Don Matthews, the Thunder were predictably reliant on the pass. Although Iron was more of a fullback, he still managed to take the field on opening day and ended up as Orlando’s leading rusher in 1991 with 288 yards. His best games came against San Antonio, rushing for 85 yards on 15 carries. Myron later followed that up with a 14 carry 65 yard effort against the Birmingham Fire.

Myron currently lives in California where he is a Deputy Probation Officer for LA county.  He takes pride in helping juveniles get the help they need and become positive contributing members of society. Myron very much liked these cards and asked for a few extra. He is also friends with the ‘Fresno WLAF Connection’- in particular: Dwight Pickens, Andre Alexander, and Kevin Sweeney.

He inscribed two bible verses along with the autographs.

John 14:6 Jesus told him, “I am the way, the truth, and the life. No one can come to the Father except through me.

Epheisians 6:11 Put on all of God’s armor so that you will be able to stand firm against all strategies of the devil.

Awesome. I love testaments. It really says a lot about the character of the former player, who they are, and what they stand for.