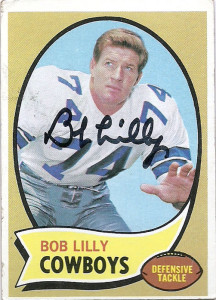 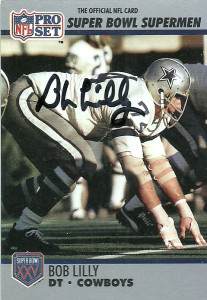 I had not been very enthusiastic about Lilly’s signing at the Lakeline Grand Opening of Sams, as I had been pretty much caught with my pants down on this one. I had neither the Topps 1971 or the Upper Deck Legends 1997 issues that were part of my set obsessions, but Kudos to my friend Spoodog, for comping me this card of Lilly’s to get signed. I am a huge fan of the Topps 1971 set,  as it’s a timeless group of cards. It immediately made me excited for the Lilly signing as the only two other cards I had just an afterthought. 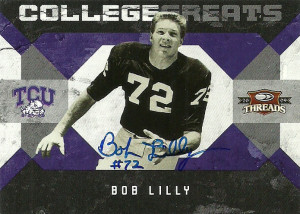 Besides his time playing football, Lilly is an avid photographer. He loves interacting with fans, and he gets high marks as a TTM responder for a very nominal fee. The Cowboys and the NFL HoF keep him very busy as he is one of the most requested NFL alumni for functions, speaking engagements, and signings. You can visit his website at www.boblilly.com.

A few months later after a lot of trouble, I sent out for Bob TTM and enclosed a small signing fee.  He responded in under a week and signed both the Upper Deck Legends card (I had such a hard time getting) and also a Donruss Threads card. 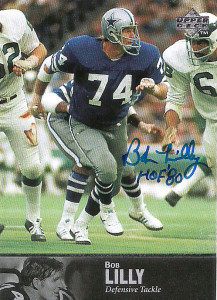 Lily was the first ever pick of the expansion Dallas Cowboys in 1961. (He was also drafted by the AFL Dallas Texans as well.) A giant, dependable, and durable (just missed one game during his career) defensive tackle, he manned the position for the Cowboys for 14 seasons. Over that time he demonstrated incredible reaction time, strength, and speed for the era as a key cog to the Cowboys defensive alignment. He became the franchise’s first Hall of Fame inductee in 1980.