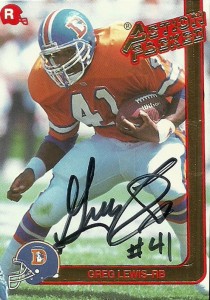 As a Junior, Greg Lewis worked his way into the starting lineup for the Washington Huskies in 1989. He’d rush for 1,100 yards and 10 TDs, earning 1,450 total yards from scrimmage. He’d top his previous efforts in 1990, with 1,256 yards rushing and 345 yards receiving- earning him First Team All-American Honors and winning the first Doak Walker Award given annually to the best college running back. Lewis’ stock slipped however, and he would not be taken until the 5th round of the 1991 draft, because of a poor 40 showing.

The Denver Broncos felt Greg fit into their offensive system. Overall he’d have 376 yards and 4 TDs his rookie year, including  119 yards in the Broncos 20-13 victory over the Steelers. In 1992, Greg followed his rookie campaign up with 268 yards and another 4 TDs. (Note that in Greg’s rookie season he wore the number 41 and in 1992 he wore number 20.) Greg unfortunately had a reoccurring knee injury and was forced to retire after the 1993 season.

He returned to his Alma Mater where he is an ambassador for the Huskies and involved in administration at the school- and enjoys coaching as well.