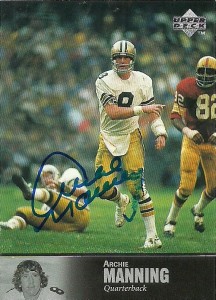 Archie Manning’s legacy has been somewhat embellished and romanticized over the years, thanks partly in part to the successes of his pro quarterback sons Peyton and Eli who have achieved Super Bowl success over their long careers.  While Manning played during the prime of the notorious ‘Dead Ball Era’, surrounded frequently by a misfit cast of players, he himself only had 2 seasons in his career where he threw more TDs to interceptions, while also posting a woeful 35-101-3 career record as a starting quarterback.  It should be noted that he led the NFL in attempts (448) and completions (230) in 1972, and earned Pro Bowl nominations in both 1978 and 1979.  His best season came at the expense at his team’s record in 1980. He’d throw for 3,716 yards and 23 TDs on 509 attempts, as the Saints stunk it up to a 1-15 record. One would think that somebody like Bobby Herbert might have made the cut over Manning, but it’s understandable that Archie’s sheer numbers and character are what endears him to this set.

During the 1982 season, the New Orleans Saints parted ways with Archie, trading him to the Houston Oilers for offensive lineman Leon Gray. He’d play there for roughly 16 games before being traded to the Minnesota Vikings with Dave Casper during the 1983 season, in exchange for two 1984 draft choices.  After the 1984 season, Manning retired. His journeyman years with the Oilers and Vikings are viewed much like other players who are associated only with their original long tenured franchise and are largely ignored.

Manning’s true strength is his character. Despite playing for some horrid teams, he was always well respected by teammates and foes alike around the league.  Through 2015, Archie has been a long time commentator on Saints games, and is a solid TTM bet. For some reason however I failed on my first attempt, and upon completion of my second try- it was slightly smudged. With Archie’s autograph in hand, the family trifecta of Archie, Eli, and Peyton has also been completed.