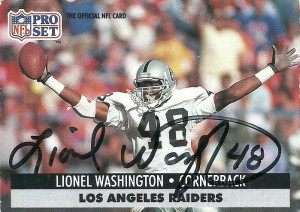 A fourth round pick of the St. Louis Cardinals in 1983, during the darker days of the franchise- Lionel Washington went on to have sterling career for the Cards, Raiders, and Broncos over 15 seasons. A solid DB for the Tulane Green Wave, and a four-year letterman for the Wave from 1979-82, Washington helped Tulane to 26 wins and appearances in the Liberty Bowl (1979) and Hall of Fame Bowl (1980) during his career. 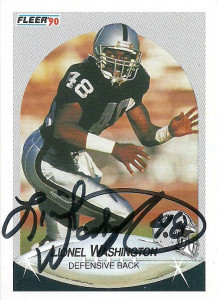 Washington spent the next 4 seasons in St. Louis. His rookie season was impressive, as he recorded 8 interceptions, 67 tackles, and a fumble, in only 8 games, but perhaps playing in the shadow of St. Louis’ mediocrity and lack of national exposure, didn’t win him the defensive rookie of the year award.  After the 1986 season, Washington was traded to the Los Angeles Raiders. There he’d go on to endear himself to fans in one of the most formidable secondaries alongside guys like Eddie Anderson, Stacey Toran, Vann McElroy, Mike Haynes, and Terry McDaniel. He’d be enshrined in Tecmo Super Bowl lore in 1991 with one of the most feared defensive backfields. It was not uncommon to intercept 2-3 passes a game or return one for a long TD with that secondary. In 1989 Washington had 3 picks and a 3 fumble recoveries for 2 TDs. Thanks to the advent of true free agency in 1993, the Raiders ran out and signed Kansas City rival CB Albert Lewis.  Washington lost his starting job to him and signed with the Denver Broncos in 1995. After a two season stint, Washington returned to the Raiders for one final season before retirement.

A venerable coach, Lionel has coached extensively at the professional level with the Packers (1999-2008), Raiders (2009-2010), and Virginia Destroyers (UFL 2011).  As of 2015, he’s returned home to Tulane where he’s not only the defensive backs coach, but the co-defensive coordinator.

Lionel Washington’s 1991 ProSet card (and the 1992 ProSet Platinum) are some of the reasons why I really appreciated ProSet’s choice of photography. The above shot is just perfect, and it illustrates why the landscape card made its reappearance in 1991. To top it off, Washington has an elegant autograph, that perfectly encompasses his number into a swoosh that curves back upon the W.