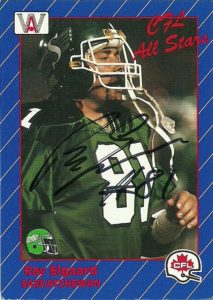 After playing at Utah on scholarship as a tight end, Ray Elgaard returned to Canada to play for the Saskatchewan Roughriders. A second round pick in the 1983 draft, Elgaard was 6’3″, 220, which made him a mismatch for many of the defensive backs that were currently playing in the league. He not only had soft hands and the speed to play slotback in the league, Ray also could just bowl over defenders en route to the endzone. 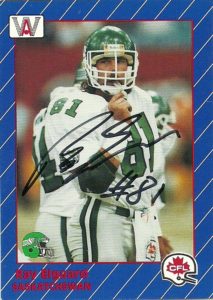 Over his career Elgaard was named an All-Canadian 3 times, and the Outstanding Canadian in the CFL in 1988, 1992, and 1993. At the time of his retirement, Ray was the career league leader in receptions and yards. He was inducted into the Saskatchewan Roughriders Plaza of Honor and into the CFL HoF in 2002.  Elgaard also was named one of the CFL’s top 50 Players in 2006.

Retired, Ray lives in Las Vegas and works for a brokerage firm.

All-World 1991 was quite an ugly card set. They looked like they were trying to spoof the ProSet 1989 set hard. They just put diagonal pinstriping on the cards. Yes, the red was hard to read on the blue cards, and the CFL logo was easier to read than the team logos that just looked sort of stuck on there after the fact. It also didn’t help that the photos were not always action shots, which left a curious speculative collector such as myself really confused.