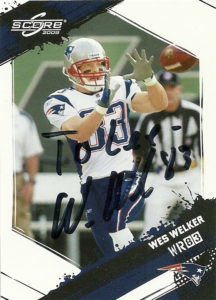 Wes Welker was a prolific slot man that played in the NFL from 2004-2015. Going undrafted out of Texas Tech in 2004, Welker had developed quite a reputation as a stellar return man and do-it-all offensive weapon for the Red Raiders, tying an NCAA record with 8 punt returns for touchdowns.

Welker signed with the San Diego Chargers, but was cut after the first game of the season to make room for another player. He’d catch on with the Dolphins who used him on kick and punt return duties. It’s there he’d burn the New England Patriots who took note of his unique skillset. As the anemic Dolphin offense continued to struggle, Welker went from being on the chopping block, to becoming the life blood of the offense. Opting not to resign Wes initially after the 2006 season, Welker became a restricted free agent.  That’s when the Patriots pounced.

Facing a quandary after the 2013 season, the Patriots were unable to come to terms with Welker to keep him in New England. To top things off, he signed with the newly retooled Denver Broncos to be Peyton Manning‘s go to guy, but Wes got the concussion bug.

You see the NFL had decided to finally take a more aggressive stance on the issue, and Welker’s size and fearlessness in the slot lent him to take shots regularly to the head. He’d play the 2013 and 2014 seasons for the Broncos and a final swan song for the St. Louis Rams in 2015. Although he didn’t want to retire, most teams saw his injury proneness as a liability, so in a sense Wes was forced to retire.

In 2017, Welker returned to the NFL scene. He was quickly courted by the Houston Texans during the Senior Bowl in Mobile and named as an offensive assistant where he is reunited with his former coach Bill O’Brien and a host of other former Patriots. It is thought that at this time he will provide assistance coaching the Texans’ wide receiver corps and break down film.

When I saw that Wes Welker was signing via a few websites I follow that track autograph returns from players, I didn’t hesitate at quickly sending him out two of my favorite cards- Score 2009, and Donruss Rookies & Stars 2009 Gold. Now,  I did only get the Score 2009 back and Wes personalized it, but I always point out that personalization doesn’t bother me, and that I am happy getting one rather than none. Maybe he really liked that Donruss Rookies & Stars 2009 as much as I did!