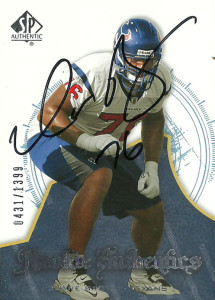 Duane Brown has really shaped up into one of the best offensive linemen in the NFL. Already an outstanding run blocker, Duane also made massive strides over the past few years with his pass blocking. Duane earned Second Team All-Pro Honors after allowing zero sacks or penalties in 2011, and First Team Honors in 2012. From 2012-2015 he’s earned a trip to Hawaii to play in the Pro Bowl, with many publications calling him one of the top offensive tackles in football. With the departure of Andre Johnson, Duane Brown was the longest tenured Texan. 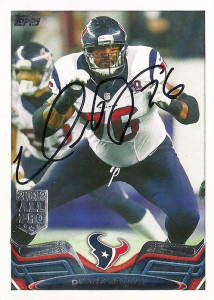 Duane became involved in a long and acrimonious holdout with the Texans in  2017. He wanted to be paid more even though there was two years left on his current contract. The market on offensive tackles had soared in recent years, and Brown felt he should be paid in line with what players of his caliber were being compensated. The team felt otherwise. You see it was a Catch 22 for the Texans. If they paid Duane, they’d be setting precedence for any player who wanted more money just to hold out. In the end, the Texans refused to deal while their offensive line stunk it up. Duane returned for the Texans week 8 tilt against the Seahawks. He suited up and played for most of the game. Two days later right before the trade deadline, the Houston Texans traded him to those same Seahawks for a 3rd round (2018), and a 2nd round (2019) pick. While some fans may argue that the reason he was traded was personal- the Texans probably weren’t acting maliciously, and did right by Duane trading him to Seattle.

I had read that the Texans did a radio show with Brown in Houston at Fuddruckers, but was under the misunderstanding that he didn’t sign autographs. I was certainly wrong, as during the show he was complimented by the radio crew about how he had gotten autograph signings during the break down to a science. He signs one for each fan during breaks, and then after the show finishes up any additional autographs.

The last stop on our marathon Houston Texans autograph tour, Lance and I rushed over to Fuddruckers and arrived with about 30 minutes to go or so. Duane nicely signed these 2 cards for me and a card for Lance right before he left.