A JuCo star in 1987 at DuPage, Mike Bellamy played wide receiver for the Fightin’ Illini from 1988 to 1989. There he’d be one of the primary targets of overall number one pick Jeff George. He’d post 59 catches for 927 yards and 8 touchdowns in 1989, and finish his overall college career with 90 catches for 1,404 yards and 10 TDs. He also flashed skills on special teams as a kick returner. His finest moment came when he caught 10 passes for 189 yards , as the Illini beat the Cavaliers in the 1990 Citrus Bowl.

Mike parlayed his impressive performance and pro day into a second round selection. He’d be drafted by the Philadelphia Eagles, a team notorious for their abuse of their wide receiver corps under head coach Buddy Ryan. Mike had a hard time getting onto the field because of injury, and only saw limited time on the field on punt returns, in a quickly bustling wide receiver corps behind fellow rookies Calvin Williams and Fred Barnett. Only after a season on the Eagles, Mike was released.

From 1992 to 1995 Mike spent time on and off the rosters of the Indianapolis Colts, Winnipeg Blue Bombers, Chicago Bears, and Oakland Raiders. During his stint in the CFL in ’93, Bellamy played slotback for the Blue Bombers, catching 12 passes for 104 yards.

In 1995, Mike joined the Frankfurt Galaxy of the newly reformed World League. He’d have his finest moment since his college days catching 30 passes for 479 yards and 7 TDs. Mike returned to play for the Galaxy again in 1996, adding another 22 catches for 313 yards.

After returning stateside, Mike turned his eye towards coaching. He’s seen positional stops as a receivers coach, quality control coach, relations, and as an assistant coach, with Mississippi State, with his Alma Mater, the Fightin’ Illini, and most recently with the Toledo Rockets. Mike was also honored by the JUCO HOF in 2009.

I think the first time I really heard of Curt Warner was when I picked up the original copy of Tecmo Bowl on the Nintendo Entertainment System. It took me a little bit to get used to it but I really liked playing the Seattle team as I relied heavily on the run with Curt Warner. I’d add a ProSet 1989 card and his Starting Lineup figurine to my collection soon enough. Despite the fact that he was in the downward phase of his career at that point- Curt was my favorite player on the Seahawks so I was really surprised when they left him unprotected for 1989.

Curt Warner played for the Penn State Nittany Lions from 1979 to 1982. There he became a legendary runningback for the school running for over 900 yards in 3 consecutive years. He’d finish ranked first on Penn State’s all time rushing list with 3,398 yards, and a bevvy of school records.

The 1983 NFL Draft was considered by many to be one of the best in league history. After John Elway and Eric Dickerson went off the board 1 and 2 respectively, the Seattle Seahawks selected Curt with the 3rd overall pick. Curt would become the bell cow of rookie head coach Chuck Knox’s ‘Ground Chuck’ attack.

An electric player out of the backfield, Curt could do it all for the Seahawks, running, catching or blocking. He led the AFC in rushing with 335 carries for 1449 yards and 13 TDs on the ground, He also caught 42 receptions for 325 yards and a TD. The Seahawks became legitimate contenders when Warner was in the backfield, and if not for Eric Dickerson, Warner probably would’ve won rookie of the year in 1983. As it stands he settled for his first of 3 Pro Bowl appearances.

After a gruesome knee injury in the opening game of 1984 ended his season, Curt rebounded in 85 with another 1,000 yard season. He’d have the best season of his career in 1986, returning to Pro Bowl form when he rushed for 1481 yards on 319 carries (13 TD)- averaging 92.6 yards per game. Warner earned his final Pro Bowl nomination in the strike shortened 87 campaign, with 985 yards in 12 contests. While he’d still cross the 1,000 yard barrier in 1988, Warner’s production began to slow down.

He’d sign as a free agent in 1990 with the Los Angeles Rams, expected to replace newly departed RB Greg Bell in the lineup. Things looked good initially as Curt scored the first TD of the Rams 1990 season, but it was pretty much downhill from there. After the Rams stumbled to a 2-5 record, they decided to lean on young backs Gaston Green, Cleveland Gary, and the reborn Marcus Dupree. Curt was unceremoniously cut rushing for 139 yards on 49 carries for LA. It was a quiet end to a quick and prolific NFL career.

Curt was inducted into the Seahawks Ring of Honor in 1994. He’s done some coaching and in the founder of an autism foundation. In 2018 he popped up onto my radar thanks to my hobby friend Deadhorse, who found that Curt was now an insurance agent. I had burned through all my cards for him in my previous attempts- so I opted to nab this Action Packed card to go along with the Rams card I had wanted for so long to be signed.

I had tried previously in the past to get Curt, but admittedly he is as elusive as he was in his playing career. He has two twin boys that have autism which understandably has been quite a handful. He and his wife have written an inspiring book about their experiences called “The Warner Boys”- Our Family’s Story of Autism and Hope.

Great cards here of Curt. It was really tough to choose between any of his modern NFL cards from Score, ProSet, and Action Packed- but in the end I settled on these two. The Rams card was a set need, and is the only card during a game in the uniform. It’s a great looking card. Too bad his career didn’t work out in LA. His Seahawks card shows Curt in all his imposing glory and it was a tough choice between that and his Score 89 card. 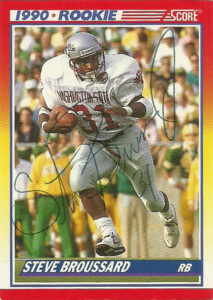 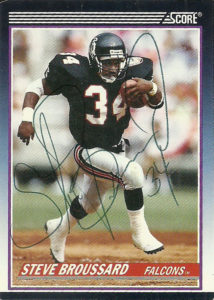 Steve Broussard has some great cards. His Skybox is exceptional. The resolution on the shot is so high you can make out the expression on Steve’s face. After nabbing him for my set need in Action Packed Rookies 1990, his two Score entries make the list for me, just barely over his Proset 1990 draft card. I tend to lean more full body shot if I can, especially if it is one where the player is in the open field. Anyway, I am very pleased to get him. I took a shot in the dark at his work address, knowing fully that in the past he has pulled any number of hijinks on autograph requesters, including having his kids sign for him. I did not count on getting these back also based on my previous experience, but after 100 days flat, the enigmatic back kindly signed these 4 cards for me. The autograph is in ball point pen- a disappointment, considering the amazing loops and varying size of his graph. 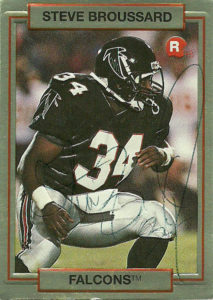 Steve finished second all-time on the Washington State career rushing charts with 3,054 yards and first in total touchdowns (41). During his Senior year in ’89 he had a career high 41 carries for 205 yards against Oregon. He also displayed his versatility by winning the WAC rushing title in 1989 (1237 yards) and receiving title in 1987 (59 receptions), distinguishing himself as only the second player in Conference history to do so.

He’d be selected in the first round by the Atlanta Falcons in 1990. Steve had a bumpy rookie season as injuries limited his campaign to 13 games. Still the compact halfback showed promise chewing up 454 yards on the ground and making 24 receptions. With a crowded backfield in the Red Gun system, Broussard continued to demonstrate himself as a nice change of pace, 3rd down back throughout his time in Atlanta- however he saw his playing time decrease every year after his rookie campaign. 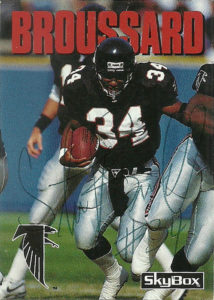 After the 1993 season, Steve played one year in Cincinnati and recorded a career high 621 yards from scrimmage (403 yards rushing and 218 yards receiving). He then returned to his home state and played for the Seahawks for the remainder of his career in the NFL. With the Seahawks, Steve was used primarily as a kick returner where he demonstrated that burst of speed that made him so dangerous. After the 1998 season, Steve retired.

Steve went into coaching first at the high school level. He then moved on to the college level with stops at Portland State, Washington State, ASU, SMU, ICLA, and Pasadena Community College. In 2017 he returned to Washington and coaches at a local high school in Vancouver.