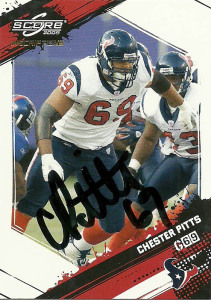 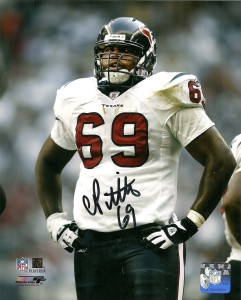 Chester Pitts for being such a mainstay and popular player on the original Texans had very few cards made of him. He was an added bonus to the GMC NFL event that was being held in Katy that day, and since they had stuff that he could sign, I had no problem picking up a freebee. Afterwards he was willing to pose for a photo with me. It was not a well advertised or 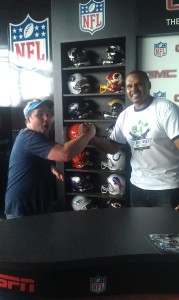 supported event as there were not that many fans there at all.  I went ahead and got his autograph on the additional Score 2009 Signatures card- which as a card baffled me because I would have thought that if it said ‘signatures’ on it- it should already have a certified autograph on it, but I digress.

After retiring from football Chester has remained busy as an ambassador, and frequent Texans commentator. He also was on 23rd The Amazing Race with former teammate and friend Ephraim Salaam.  While they did not fare well and were eliminated early on, they provided fans of the show plenty of laughs.  He’s also become a financial advisor,  has his own charitable foundation and in 2016, he was named an ‘Honor Warrior’ by his Alma Mater. Chester Pitts is considered the first ironman of the Houston Texans and has garnered the nickname “Mr. Texan” from fans. Outside of former kicker Kris Brown, Pitts had logged the most games played in a row on the team roster with 114 games started. He saw the beginnings of the franchise, as one of the team’s second round draft choice in 2002 after David Carr and Jabar Gaffney.  He’d play through the team’s tenure under Dom Capers and Charlie Casserly, and into the current Kubiak era- a total of seven solid seasons, before 2 games into his 8th he suffered a catastrophic injury and spent the rest of 2009 on IR. As it was a contract year, the team allowed him to bolt via free agency to the Seattle Seahawks for 2010.  Chester started 5 games for the Seahawks, and made the playoffs for the first time in his career.

I slid over to Chester’s line at Fan Fest, after striking out on Danieal Manning, whose line was closing. I waited maybe two minutes before I was up front and talked to him a little bit. When I asked him if he was still with Seattle he told me that he was pretty much retired now. Pitts was looking noticeably slimmer and later admitted he had lost about 30 pounds off of his playing weight. He’s now working as a financial advisor and is an advocate for better fiscal responsibility by former NFL players.

I had a card for Chester, but he had already signed it. No other manufacturer other than Score ever made one of Chester in his tenure as a Texan. Probably a slight on him because he played on such horrible lines. Still he was a solid blocker for his time with the team and I hope he gets the recognition he deserves for his time with the Texans organization.