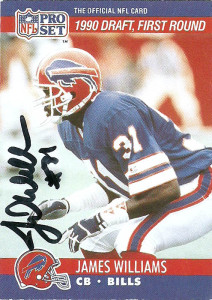 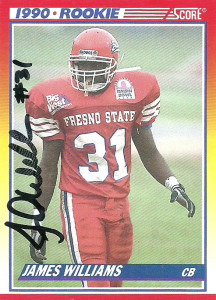 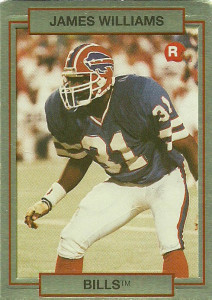 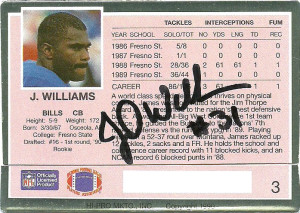 Small bit of trivia here, as James Williams is one of a handful of players (if not the only player) to play for 3 expansion franchises, being the: Jacksonville Jaguars, (the reborn) Cleveland Browns, and the (XFL) San Fransisco Demons.

Drafted back in 1990 by the New Orleans Saints in the 6th round of the draft out of Mississippi State, Williams would be a nice find for the franchise and would spend his first 5 years with NO. He’d come in and sub nicely when one of the Dome Patrol needed a break during their twilight years together even starting 4 games in 1991, recording his first career sack against Chicago, along with 29 tackles and a fumble recovery. In 1993 J-Roc would start 9 games at left inside linebacker for injured Sam Mills and respond with a solid performance (89 tackles, 2 sacks, 1 FF).  With free agency in full effect by 1994, Williams again started for the Saints but this time at RILB, garnering 54 tackles, 2 picks and his first career touchdown.

Left exposed after the season for the 1995 Panthers/ Jaguars expansion draft, – James was selected by the Jacksonville Jaguars with the 49th pick. Williams started 6 games again, recording 2 more interceptions, 2 FF and 47 tackles but injuries cost him half of 1995 and all of 1996. He’d sign with the 49ers and be on the roster of the team through 1998.  He’d close out his NFL career in 1999 with the Browns with 2 FR and 11 tackles. Williams’ career did not end there. He’d be drafted by the San Fransisco Demons of the XFL in 2001. Making the jump to play for the Demons he’d help the team earn a berth in the XFL’s Million Dollar Game leading the team with 43 tackles and 2 sacks. The XFL though, -a joint venture between the WWE and NBC died on the operating table that season due to bad ratings. Williams would retire after that season.

These were some really nice cards of J-Roc, and despite how people really tore them up the XFL had some really nice underpinnings to its design, hearkening back to classic college cards of the 50s and 60s. Just really inspiring! Sure the barbed wire effect is hilarious and dated even by those years standards, bloating the production value, but I couldn’t help but have a soft spot for them. The Fleer 1995 cards were also really nice, and this served as part of their 1st season of Jacksonville Jaguars cards.  Below are J-Roc’s NFL statistics.