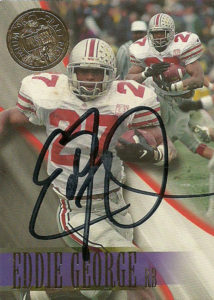 Eddie George took Ohio State by storm. In 3 years with the college, he ran up to second place on the school’s vaunted rushing list including a school record 1,927 yards and 24 TDs in 1995. In 1996, Eddie George was the last 1st round Houston Oiler draft pick- ever.

It was a bitter moment of the franchise’s history.  Bud Adams, ever looking to shine his coffers, had gambled and lost with the city of Houston. After getting a stadium tax placed on businesses in Houston for luxury boxes at the Astrodome, he decided that he wanted a new stadium instead. Laughably he also called it, the Bud Dome in his proposal. With the Astros and Rockets not interested, Bud put it to the city leaders instead. Call it bad timing, but the city wasn’t interested. It also didn’t help that the salary cap hamstrung the team, and most of its talent was fleeced. After flirting and failing with a few suitors, Nashville stepped up to the plate. Desperate, but sensing a good deal, Adams signed. He intended to keep the franchise in Houston for a few years, but after making the announcement- fans stayed away in droves to show their displeasure.

Eddie in the meantime was declared the starting tailback coming out of camp and proceed to nab Rookie of the Year Honors in 1996 after rushing for 1,336 yards, 8 TDs, and a career long 76 yard gallop. 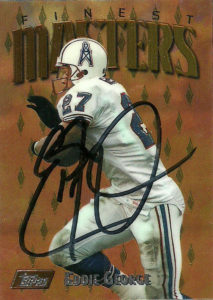 The following year in 1997, Bud accelerated his plans to move to Tennessee, finding a temporary home in Memphis while the stadium was being constructed in Nashville. Memphis itself was not happy about the situation. Memphis and Nashville have never had a great relationship, and on top of it, Memphis had long sought an NFL franchise of its own, so why should Nashville get it? Attendance improved, but only slightly, as the franchise changed from the Houston Oilers- to the Tennessee Oilers.

George continued his punishing running style, earning his first of four consecutive Pro Bowl berths, with 1,399 yards and 6 TDs on 357 carries.  At the time of the Oilers departure from Houston and transition to the Titans, I was going through a very tough time in my life.  It was probably good that I couldn’t focus on the heartbreak of the team leaving the city as I was dealing with a bad relationship of my own. Still I was able to watch George’s smothering effort against the Dallas Cowboys on Thanksgiving, as the Oilers punished the Cowboys 27-14 behind a great defensive performance and 34 carries for 110 yards from Eddie.  (The Topps Finest Matters card above regales this tale with a certain amount of pride or Cowboy hate.)  Anyway, unhappy with the situation in Memphis, Bud again moved his vagabond team to Nashville, to play at Vanderbilt Stadium in 1998.  Finally in 1999, the Oilers changed their name to the Titans and settled in Bud’s dream Roman Colosseum by the river.

George logged three more Pro Bowl berths during his career, culminating in 2000 with his first and only AP nomination, when he led the NFL in carries with 403. That season he also rushed for a career high 1,509 yards, 14 TDs, and 50 receptions.  He played for the Titans through 2003,  finishing his career in Dallas in 2004. Like many greats, George’s time in Dallas is largely an afterthought as he is remembered by and large as a Titan, but the season there in Dallas allowed him to break the 10k career rushing yardage mark.

Eddie personified durability. Over his career he started 136/141 games in 9 seasons, and did not miss a single start until 2004. Of note, Eddie holds the NFL record for most consecutive seasons with 300 or more carries, at 8.  Eddie is the all-time leading rusher for the Tennessee Titans with 9073 yards and holds many of the franchise’s records. (He played only one season for the HOUSTON Oilers.) George also was the last Oiler that I’d get a jersey of.  It was one of the many pieces of personal things I’d lose after a hasty move out from an ugly breakup in 1998.

The Oilers leaving, coupled with discovering girls, graduating high school, escalating card prices for garbage product, and getting a job, culminated in a perfect storm, with me eschewing the football card market all together.  I happened to be stumbling around Toys ‘R Us one day somewhere during those more blurred years and decided out of the blue to pick up a blister pack of Press Pass 1996. Included was the whole set, but more importantly, the Eddie George Ohio State card that survived all those years.

George has had his jersey retired by Ohio State and in 2011 was inducted into the College Football Hall of Fame. He enjoys television- all forms really, as he has contributed as a fan on the sidelines of Ohio State games, as a commentator and color commentator, and as an actor, in reality, mainstream, sports, and musical productions.

I had long sought Eddie, but his nasty price tag prevented me from taking a shot. Recently a few friends were able to track him down c/o the Ambassador Theater in NYC and got an autograph. Eddie has gone headfirst into acting and was on Broadway in the Musical Chicago.  I got my stuff there before the show closed in February, but his responses slowed to a trickle. Luckily a few months later he came back to his mail and signed my two cards- a big coup for me.

Remember kids: “Always strike while the iron is hot.”