Shifty and speedy, Noel Devine posted solid numbers while he played college ball at West Virginia. He finished his college career with 4317 yards on 729 carries, scoring 29 TDs. Noel also had 98 receptions for 710 yards for 2 TDs. His personal best was in 2009 when he posted 241 carries for 1465 yards and 13 TDs on the ground. Due to his size (5’7, 160), an ankle injury, and a poor combine showing- Noel was not drafted during the 2011 draft.

He was signed by the Philadelphia Eagles, but after 4 days he left the team for undisclosed reasons. Unable to find an NFL squad, Noel joined the UFL Omaha Nighthawks (2011) for a season rushing 5 times for 14 yards and a TD, while catching 2 passes for 20 yards. The following year he’d join the Montreal Alouettes of the CFL playing there for two seasons (2012-2013). After a short off-season with the Edmonton Eskimos, he returned to WVU to finish his law degree in 2015.

During 2017 he resurrected his football career joining The Spring League, and in early 2019 signed with the Wheeling Roughriders of the American Arena League. He was among the players available for the XFL 2020 pool, but was not selected.

I pulled this autograph from a box of Upper Deck College Legends I bought in 2019. It’s rarer and rarer to see on card autographs, but overall I was pretty impressed with the look of this shot.

During the Jurassic Period of football, there were some absolute beasts of defenders that took the league by storm in the 70s. One of them was Carl Hairston, a little known defensive lineman prospect out of UMES or (University of Maryland Eastern Shore). He played on some terrible teams during college, which allowed him to really hone his game. Hairston was named to the Mid-Eastern Athletic Conference team 3 times. In his final year with the team, he posted 147 tackles and 15 sacks, good enough to get noticed by the Philadelphia Eagles, who selected Carl in the 7th round of the 1976 draft.

He’d make the squad and in fact lead the NFL in sacks in 1979 (unofficially) with 15. Then in 1980, he’d help champion the defense that got the Eagles to Super Bowl XV.  Injuries began to slow Hairston down in 1983, and soon thereafter he’d be traded to the Cleveland Browns, where he’d be a mainstay on the line until 1989. He’d finish his career in Phoenix the following season.

Carl has an extensive coaching resume at the Pro level, and has seen stops in the NFL (Phoenix, KC, St Louis, and Green Bay), UFL (Florida, Omaha), and CFL (British Columbia). He earned a Super Bowl ring as the defensive line coach for the St. Louis Rams (Super Bowl XXXIV).

Carl is another one of these players who should probably be inducted into the Pro Football Hall of Fame. A dominant lineman during his time, unofficially he has 1,141 tackles and 94 sacks to his name in 184 starts.

Both of these are really nice cards of Carl. I almost feel like they are nods to him out of respect- like these card companies knew he was long in the tooth but they still wanted to pay him respects with their brand of card. The ProSet Legends 1991 card is an absolute gem. Merv Corning can make a player standing on the sideline look exciting, and this highly detailed image is no different with its nicks and bumps. It’s a fine card with excellent minimal design- which screams classy. The Score Supplemental 1989 had always been floating around my doubles box, so I had been kicking around the idea of getting it autographed for sometime. It’s unique because it’s obviously a special teams shot, but he’s just sort of popping up in a sea of helmets. 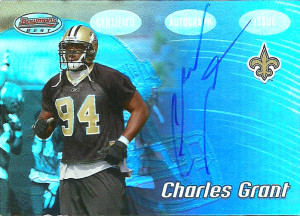