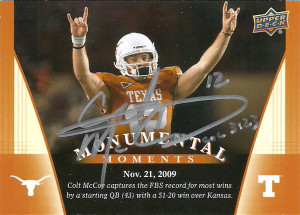 I had long debated going to the second day of the Sam’s Wholesale Grand Opening, but with a perfect storm of days I had to take off anyway, it made sense that I go ahead and dive in for the former Longhorn signal caller. I had 5 or 6 cards of him, but outside of the Longhorns card here, I really wasn’t that jazzed about anything I had. Thankfully Spoodog offered me a fairly nice Playoff 2012 to get autographed. 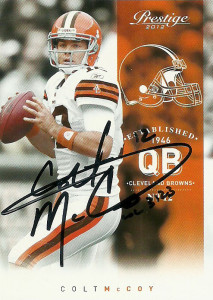 Colt’s career has been… bumpy… since getting traded from the Browns in 2013 to the San Fransisco 49ers for low end picks. He didn’t look all that spectacular in the preseason, but still managed to do mop up duty in 4 games behind Colin Kapernick. After the season Colt signed with the Washington Redskins. The collective brains of the NFL yawned at the signing. (I myself had hoped he’d be brought in by the Texans.) Most pundits had written McCoy off and now going up against RGIII and Kirk Cousins, Colt managed to claw his way onto the roster and patiently bide his time as the best 3rd string quarterback in the NFL. McCoy eventually got his shot as injuries and inconsistency plagued the Redskins at quarterback. He’d lead the team to back to back exciting victories over the Titans, and then the heavily favored Cowboys.  Injured late in the season, his performance was good enough to earn him a new contract with the Redskins. 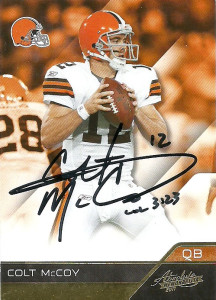 The first few people through the line got way too many multiples signed. This ruined it for the rest of us. Colt’s signature is not a quick one, taking roughly 15 seconds to complete for each card. With a decent line building, this caused the gatekeepers to ask us to limit our requests to two a person. It was not unreasonable at all- but with them not patrolling the fans at the front with McCoy, people abused it anyway. I decided 3 was not unreasonable for me to get signed as that was my original thought. When I spoke to Colt, I told him that his heroics in the Redskins Cowboys game was the stuff of legend. He grinned from ear to ear and told me it was one of his fondest memories in the NFL. He also told me that he prefers Colossians 3:23 as his testament verse of choice.