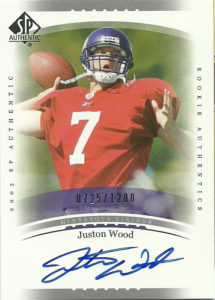 Juston Wood went undrafted after putting up some solid numbers at Portland State. In 2001, he put up 23 TDs to only 5 interceptions in 366 attempts for the PSU Vikings. Going undrafted, he signed with the Minnesota Vikings in 2003, but didn’t make the roster.  Afterwards, Wood signed with the Arena Football League 2’s Central Valley Coyotes. He had a solid 2005 campaign with the squad, throwing for 89 TDs and 4,361 yards.  He’d then have short stints on the New York Dragons and Philadelphia Soul over the next few years,  retiring in 2009.  As of 2016 he’s an assistant coach at Cal Poly State.