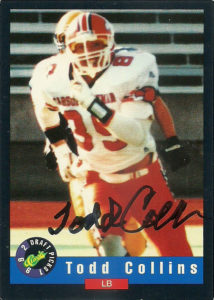 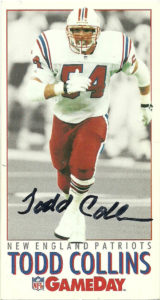 Todd Collins finished his career at Carson-Newman with 27 games under his belt, 156 total tackles, 15 tackles for loss, 3 interceptions and 1 fumble recovery. He took interceptions of 44 yards and 75 yards to paydirt and earned All-South Atlantic Conference Honors in 1991. A 3rd round pick of the Patriots in 1992, Collins was a nice find and made two Super Bowl appearances- one with the Patriots and later on with the St Louis Rams.

It should be noted that there just wasn’t too many scouting photos of Todd available from his days in college, so both StarPics and Classic ran to the presses with the same image. The GameDay is absolutely stunning. Collins was well regarded for his long frame and it is definitely showcased here with him galloping across the field. An incredibly fast linebacker that ran a sub 4.3 after rehabbing from knee surgery, Todd Collins was a powerful hitter that was considered a top 5 linebacker in the 1992 draft.  Collins originally committed to play for Georgia, and then transferred first to Tennessee, and later to tiny Carson-Newman. Collins was eventually drafted by the New England Patriots and played for them from 1992-1998, and the Rams through 2000. starting in a Super Bowl once for each team.  Injuries shortened his career and he retired briefly for a season in 1995, but Collins was a ferocious competitor who fought through pain including a separated shoulder, a bum knee, a broken foot, and a strained neck over his tenure in the sport.  In a quirky side note, before a big games Todd practiced a superstition of rubbing stones and charms over previous injuries he’d sustained. Teams even began selling an incense before the game that he apparently liked to use to profit off of his behavior.

In 1992 I began sending out for autographs bulk through the mail to teams. I’d write a letter with 20-30 cards included with it trying to get a bunch of autographs at once. Most of the time I’d get letters back saying I needed to send cards to specific players, but on the rare occasion I’d get lucky with a bulk autograph return. I focused on the really bad teams, the 1-15s and 3-12s of the year because I theorized that they’d probably get less fan mail and Todd was one of my successes during one of my Patriot blitzes.