Keith and his twin brother Kerry both played tight end for the Texas Longhorns. Keith really stood out his Senior year catching 33 passes for 605 yards and 6 TDs. (That’s 18.3 yards per catch- at tight end!)

He’d be selected in the 7th round of the 1991 draft by the Washington Redskins. Keith hopped around the league from there, playing in 1991 with the Steelers and catching his first professional TD. It’d be in 1992 that Cash joined the Chiefs, where he spent his final 5 season with. Over that period he’d catch 111 passes for 1046 yards and 9 TDs.

It’d be in 1993 that the Houston Oilers hosted the Kansas City Chiefs in the playoffs. With Joe Montana at QB the Chiefs pulled off a comeback victory over the Oilers 28-20. During that game, Keith caught a TD pass from Joe, and immediately spiked it square on the face of then Houston defensive coordinator Buddy Ryan. It was the proverbial nail in the coffin, not only for the game, but for the franchise itself.

It was rumored that Keith was mad at the Oilers, because like many teams do, they called him up, and told him that they were going to select him soon. Instead they passed on him, and he was eventually selected by the Redskins. I guess he never let that go.

Keith retired after the 1996 season- and so did his brother. They went back to school at UT and finished their Sports Management degrees.

A friend of mine on Twitter who is a big Chiefs fan was kind enough to pass Keith’s address on to me after he got his autograph. While I’ve always felt sore about Keith sticking a dagger through my heart when I was an Oilers fan, I had some great memories of him with his time at Texas and watching him and his brother on Raycom. As of 2020 he works for the Chiefs Alumni Association. 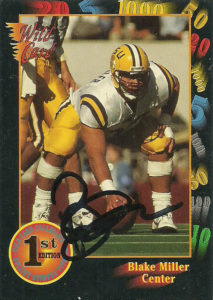