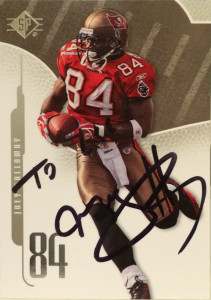 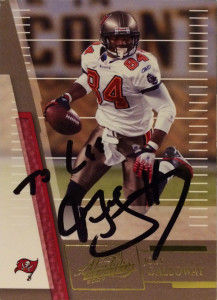 After a stellar career with the Buckeyes, Joey Galloway was drafted by the Seattle Seahawks in the first round (8th overall) of the 1995 draft. The Seahawks needed his speed to stretch the field and to be the heir apparent to Brian Blades.  Gifted with blazing speed and great hands, Joey contributed over 1,000 yards from scrimmage in each of his first 4 seasons receiving, returning, and rushing the ball for the Seahawks. In 3 of those seasons he recorded 1,000 yards receiving, and narrowly missed by 13 yards on a 4th.  Signed to a hefty contract, and then later injured, Joey was traded to the Cowboys for two number one picks in 2000.

Dallas was desperate to get one last shot at the Super Bowl, and with Michael Irvin‘s career unceremoniously ending, Jerry Jones wanted to get Aikman and Smith one more title. It didn’t work out the way that they hoped. Galloway was injured after his first start, and the Cowboys collapsed to a 5-11 record. As age caught up to the Cowboys skill players, the offense became stagnant.  In his final season with the team in 2003, Galloway led the NFL with 19.8 yards per reception.

Joey joined the Buccaneers in 2004. He’d enjoy a renaissance not seen since his days in Seattle. In 2005, Galloway had a career high 1,287 yards receiving. He’d follow his 2005 season up with 2 more back to back 1,000 yard seasons. After an injury riddled 2008, Galloway entered a brief journeyman phase to his career, playing for the Patriots in 2009 and retiring after playing briefly with the Redskins in 2010.

Joey in 2016, is involved in sports color commentary for ESPN.   Galloway is not the fastest signer through the mail, but none the less he boasts a very high TTM success rate.