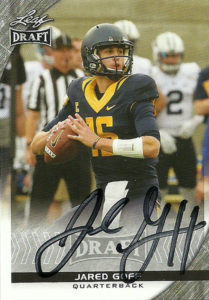 As part of their big splash return to Los Angeles, and being on the HBO show Hard Knocks, the Rams traded up for the #1 overall pick to select ‘local’ (as in state) product Jared Goff out of California in 2016. Jared had the most productive career for a QB coming out of Cal since Aaron Rodgers.  He earned All-American honors as a Junior in 2015 throwing for 4714 yards on 341 completions and 43 TDs to only 13 picks. A prototypical pocket passer, Jared finished with 12,195 yards, and 96 TDs with a career passer rating of 144.0.

Head coach Jeff Fisher talked the tough talk during the preseason, emphasizing that the 7-9 and 8-8 records were no longer acceptable for success. He decided to sit Goff behind starter Case Keenum, and after a rough start, the Rams were 3-2 coming out of the gate, but after a crushing defeat to the Bills in October, the bottom basically 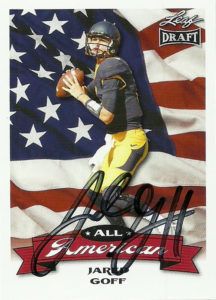 fell out on the season. The players lost confidence in Fisher and the team unraveled. They’d win one game the rest of the way out. In the midst of the chaos, Goff took over starter duties at quarterback and started the last 7 games of the season.  Jared’s numbers for his rookie season were: 112/205, 1089 yards, 5 TDs to 8 INT.  It really didn’t help that Goff, had a porous offensive line- as Goff took 28 sacks on the chin during that 7 game stretch.  After the Rams loss to the Falcons on December 11th, the Rams relieved Jeff Fisher of his job. After the season, the Rams hired offensive guru Sean McVay to be head coach. It is the hope that under his tutelage and alongside offensive weapons Todd Gurley and Tavon Austin, the Rams can find the fireworks on offense the team is looking for in 2017.

A nice surprise as the #1 overall pick of the 2016 draft signed 2 cards for me in less than two months. Things just seemed to line up perfectly for me on this one as the Rams had just moved from St. Louis back to LA.  I suspected that perhaps the mailboxes in LA would be light, and they’d be eager to answer any fan mail at all that was coming through. Also since Goff was the #1 overall pick, it made sense that I’d strike while the iron was hot. Since that period, Goff has gone almost completely cold, and as of this date he hasn’t signed anything since 2016’s training camp. I got really, really lucky on the Sage Artistry card of him.  I pulled it from a box break in 2017, after previously missing out on sending it to him, and I really like it a lot more than the two Leaf entries I got. Plus I mean look at the autographs from Leaf compared to the Sage Artistry. It’s obvious that the sat down for the Sage ones, as opposed to the Leaf TTM that are rushed. 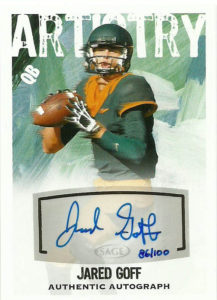 I feel good about the Rams being back in LA honestly. It’s a shame I don’t live there anymore or I’d attend some games. My admiration of the team goes back to the 80s, during the heyday of Jim Everett and John Robinson. It was a double body blow when the Rams left LA for St. Louis, and then the Oilers followed suit to Tennessee thereafter. I don’t like franchise relocation at all, and one must wonder why the NFL suffers from such an issue when MLB seems completely stable, despite its bevvy of small market franchises.  The Rams coming back to LA completes the circle to me- as hypocritical as that sounds. You have to admire St. Louis for toughing it out for as long as they did with the Rams, but I liken it to a infidelious marriage. St. Louis knew the Rams history and that they longed to be with LA when they got together in the first place. I know this marks the second time that St. Louis has been left at the altar by a football franchise, but to me, the move to St. L smacked of cutting corners to begin with. Regardless I sincerely hope in the future, the NFL in its brain trust will eventually grant an expansion franchise to the city.