Connor Cook was a 3 year starter for the Michigan State Spartans. He played college ball there from from 2011 to 2015, and saw action in 43 games, passing for 9,184 yards and 71 TDs to 22 interceptions. Cook was selected by the Oakland Raiders in the 4th round of the 2016 NFL Draft. The Raiders saw value selecting him and decided to groom Cook behind incumbent quarterback Derek Carr.

He was pressed into his first starting duty- a grinder of a game against the Houston Texans in the first round of the 2016 Playoffs. The Raiders fell 27-14, as Cook threw for 161 yards and a TD to 3 interceptions. Connor saw no action in 2017 and was cut in 2018 after the Raiders traded for AJ McCarron.

Connor spent the next year on and off the rosters of the Panthers, Bengals and Lions. He was selected in the first round of the XFL 2020 Draft by the Houston Roughnecks. I sort of questioned the move considering the Roughnecks already had Philip Walker allocated to the team, but coach June Jones insisted that he was picking the best player available with NFL experience.

I pulled every card I had of Connor and added 2 or 3 more hoping to get Connor’s autograph during the season. Luck was on my side as the Roughnecks frequently put together fan events.

The Roughnecks put together an event in the Woodlands where they had Connor Cook and Sammie Coates at. It was a no brainer. I was going to call it a success if I could get 2 or 3 cards signed- but in the end I was able to get all 5 knocked out along with a stack of cards of Sammie as well.

The event itself went well. The players were friendly and approachable. Connor talked to me one on one for a few minutes. We talked about briefly about the AAF and how it failed before he had to go up on stage. There Connor really shined, with a quick wit and clever smile. Afterwards both he and Sammie signed more autographs for fans. I was able to get them both on posters before I headed back out.

Of this group, the Panini Contenders cards really stood out. I love the Gameday cards. I wasn’t really fond of either of the Leaf entries, but the Score Scorecard makes up for the Leaf cards trite design.

Well the quarterback competition between Cook and Walker apparently went down to the wire. In the end PJ was named starting quarterback of the Roughnecks. I really had hoped to see more of Connor, but PJ played lights out the entire way. Still I think Connor has the prospects of being one of the brighter stars in a spring league if he decides to try that route again.

I got a few more cards of his after being caught flat footed at the Roughnecks season ticket holder event, but the cards, ordered 2 weeks before the league shut down- didn’t arrive until after 2 months after the league shut down. Still that gave me a chance to add his Topps XFL 2020 card to the batch, which really pushed him up on my list of players I wanted to get an autograph from thru. I really liked how the Elite cards were designed in 2016 as well. The abstract design is actually really smart as the lines all cross artistic points of emphasis. It’s a beautiful card, but like many the distribution kills my interest in making this one a set to collect. I’m not very hot on the gaudy Prism set, but I liked the die cut helmet one enough as it is eye catching.

After being waived by the Rams, Aaron Green has seen stints on the rosters of the Dallas Cowboys (2017) and the Buffalo Bills (2018). He’d be released on an injury settlement in May of 2018, later signing with the San Antonio Commanders of the fledgling AAF.

Green has a stack of really nice cards that I wanted to get signed, and I made good headway at the AAF Season Ticket Holders Party. Unfortunately my silver marker dried out, so I was forced to make do with the Brown signatures. Still I think they came out alright. When I asked him if he had gas in the tank to run for 7 yards per carry like he did at TCU, he cooly flashed a smile at me.

Later during the introductions the franchise lauded praise upon him for being a San Antonio legend from the time that Aaron played for San Antonio Madison in High School.

Green was one of the few players from that stage who made it from the opening bell of the league to the final cut. He spelled Kenneth Farrow II at runningback and posted 25 carries for 98 yards, along with 7 catches for 53 yards in 6 contests. He had his best game in the opener against San Diego when he gashed the Fleet for 43 yards on 6 carries almost breaking one loose.

After the Salt Lake City game I recognized Green in the crowd talking to his family. When he saw his Topps base card, he was very impressed, and penned a total of 3 cards for me that evening. A few weeks after the AAF folded I started sniping out certified autographs on EBay on the cheap. I got lucky and pulled down one of Green in no time flat. 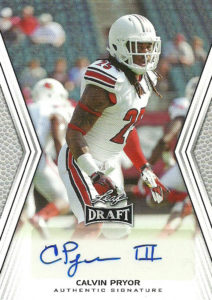 Calvin Pryor III played college ball at Louisville. A starter as a true Freshman, Pryor started laying down the wood for the Cardinals in 2011 with 43 total tackles, 3 tackles for loss, 1 sack, 2 interceptions, 5 pass deflections, and 2 forced fumbles playing the majority of his snaps at free safety. He continued his wrecking ways in 2012, posting a solid 100 total tackles, 2.5 tackles for loss, a sack, and 2 interceptions. In his final year at Louisville (2013), Calvin finished with 72 tackles, 3 tackles for loss, 3 interceptions, and 4 passes defended. A physical player, Pryor amazingly knocked a player out in 3 consecutive games. There was a lot of buzz surrounding Calvin entering the 2014 NFL Draft, and scouts loved his set skills, instincts, and physicality- all things you’d ask for in a free safety roaming the line of scrimmage. He ended up going #18 overall to the New York Jets.

Well Pryor had a rough rookie season to say the least. He hd some bright spots, but he missed 15 total tackles on the year.  In 11 starts Calvin clocked 60 combined tackles, 2 pass defended, and .5 sacks. It was a rough trial by fire to say the least.  2015 proved to be his best season on record. Moved around the field and playing both safety positions, Pryor finished with 69 total tackles, 2 interceptions, 6 pass deflections, and a forced fumble.  He’d be moved out to strong safety for the 2016 season, and regressed. Considered a liability in coverage, Calvin had 6 pass deflections, a forced fumble, and 60 total tackles.  After a tumultuous offseason, Calvin was traded to the Cleveland Browns in 2017, but soon thereafter be released by the franchise for fighting with a teammate. He was subsequently picked up by the Jacksonville Jaguars, but released before the end of the season, suiting up for just 2 games. The Texans kicked the tires on Calvin at the end of 2017 but opted not to sign him.

Currently Calvin is a free agent. I think he’s still got the skills to ball. A lot of good in the box safeties seem to go through this pariah stage of their career, but at some point find a home that really suits their unique skillset. Case in point Bonecrusher Bernard Pollard or DJ Swearinger.  Both of these guys were great playmakers, who just needed to be put in systems that really showcased their abilities at or close to the line of scrimmage. As Calvin is still young, there’s still hope for him left, and if the NFL isn’t where it is at, I think he’d make a fine addition to the Alliance of American Football.