Ben Snell paired with Siran Stacy in the Claymores backfield to form a nice one two punch. He’d play two seasons in NFLE, rushing for a career high 259 yards on 48 carries and scoring his first TD of his career in 2000. He then joined the XFL in 2001, playing for the Las Vegas Outlaws. -Snell rushed 31 times for 123 yards, while catching 6 passes and a TD for LV before the league folded.

A four-year starter at Ohio Northern, Snell rushed for a school-record 16 touchdowns and 1,137 yards on 158 carries (7.2 avg.) as a senior in 1999. All in all with Ohio Northern, Ben’s rushing totals included 2,871 yards rushing on 502 carries and 33 touchdowns to go along with 275 yards receiving on 38 receptions. He’s also the nephew of Jets great Matt Snell. 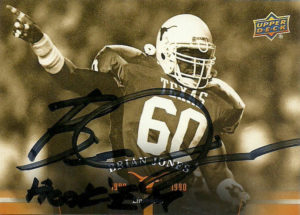 After losing all of the other cards to the TTM gods back in 2013 of JJ Moses, I quickly scrambled to get some cards together to have him sign at that year’s Fan Fest event. Unfortunately this Upper Deck 2003 missed the cut, so once I got a copy I held onto it just in case I’d get the chance to see JJ again.

I decided at the last second again to make the yearly pilgrimage to Houston for the 2014 Fan Fest. I wasn’t really prepared for the journey there. The weather was some of the worst I had encountered in quite a while, and I got lost. Luckily I pulled out my ancient GPS – that hadn’t ever been updated (2007) and limped into Kemah with a new umbrella in hand. The remnants of a tropical storm were dumping in waves over the Houston area, but thankfully this kept the event low key. I quickly found parking in the covered lot and was directed to the backup makeup location where the players and cheerleaders were going to sign in tents.  The players were forgivingly late, but once they got the procession going they quickly signed everything in their way.

When I got up to the front, I was really surprised that JJ remembered me. He was very kind, and let me know that he had read and liked my previous post on him! I hoped at a later date to do a custom of JJ from his days with the Claymores, but I could not find an image that was large enough (that wouldn’t pixelate badly) to use. I reached out to JJ to see if he had anything through his Facebook page, but as of the publishing of this article, did not hear back from him. JJ remains active in the local Houston area for events, charities, and as a Houston Texans’ Ambassador.